The weather has been pretty crazy here lately. We have had some great weather days, some hot and muggy days, some rainy days, and everything in between. But we have still managed to get outside most of the days, even if it is just for a bit. I have been trying to mix up our activities so that we aren’t always doing the same things outside. So, some days I ask the Chiplet first what he wants, and other times the Fudgelet. The first activity chosen usually dictates front yard or back yard, and then the other kid can pick from that location. Other days I have been planning small activities, maybe bringing out something we haven’t done for a bit, just to keep things interesting. 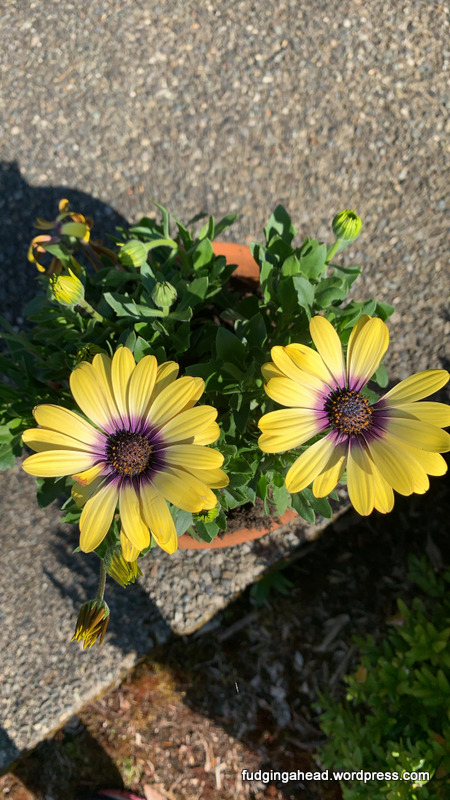 One of the first activities was a bit challenging since we weren’t having warm, sunny weather. But, it was an idea from the Fudgelet’s Kiwi Crate, so we tried it…

A solar oven! It’s hard to tell from the picture below because we used Hershey kisses which like to hold onto their shape even when actually melted, but it did work!

It also worked to inform me that the kids don’t like smores. Just me and K. Oh well, more for us! (They aren’t marshmallow fans.)

A more successful activity that made everyone happy was planting with the kids. 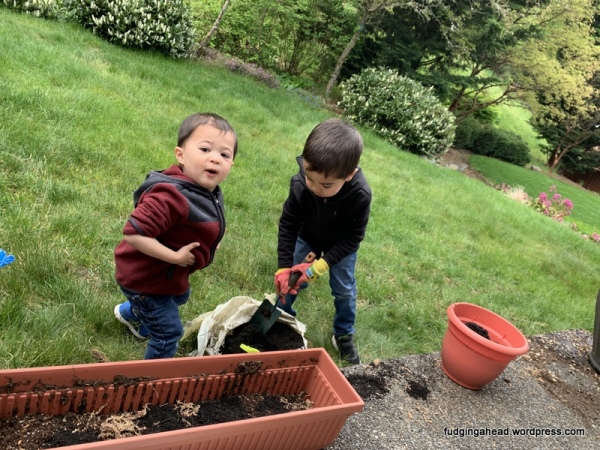 The Chiplet was tasked with scooping old dirt out of the planters. It mostly worked, except he started scooping the new dirt back into their bags, so then we had to take the scoops away from him. The Fudgelet has helped me for a few years now, so he was a bit better at the actual planting. His second major task was keeping the Chiplet out of trouble. We were outside working for about 2 hours and it was a lot, but we enjoyed ourselves.

Our other activities have been more simple. There is our usual sand and water bins/table, riding bikes, and so on.

There is also always bubbles, but now they each have a bubble blower which works well. 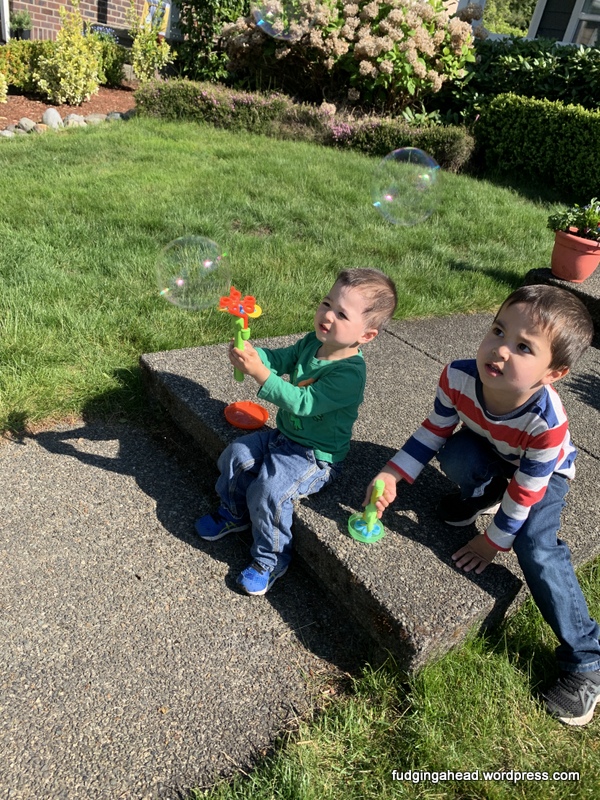 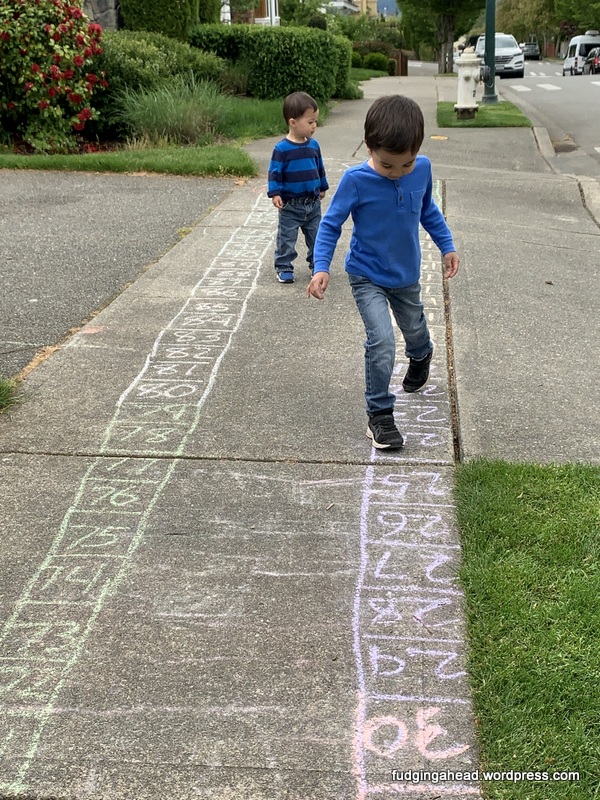 On the hot days, don’t rule out sprinklers. The Chiplet hated it last year but was a big fan for our first time this year… 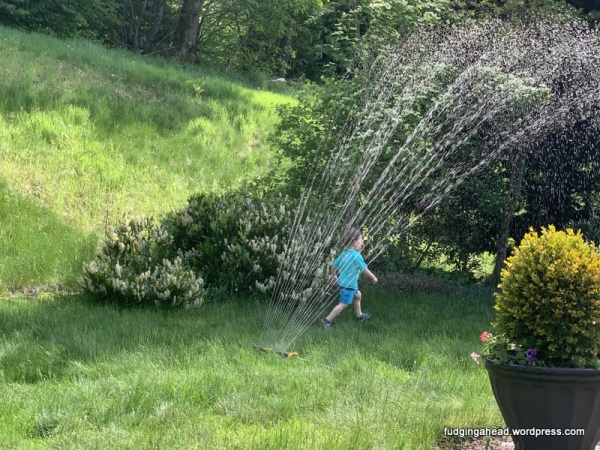 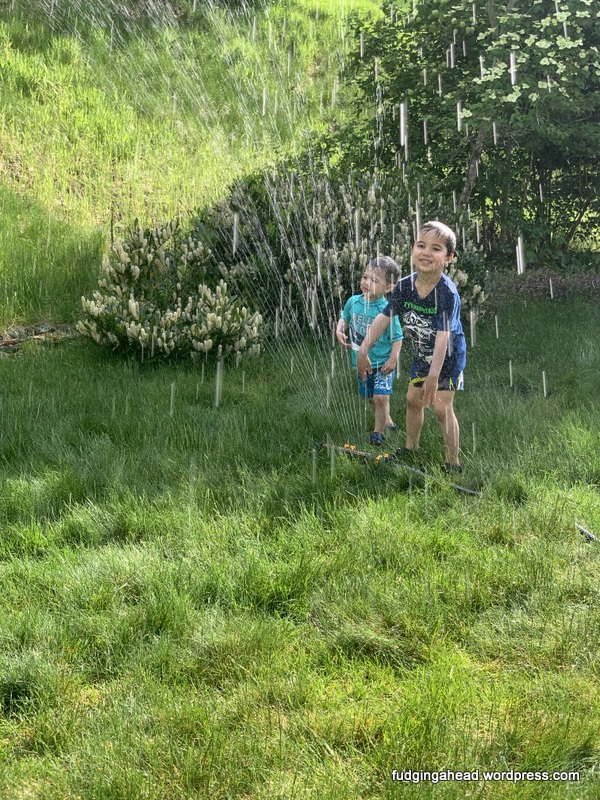 For this next one, we did it inside this time for the Fudgelet’s school meeting, but we also made it outside already: Oobleck! You mix cornstarch (tapioca flour also works) and water with a ratio of about 2:1. Start with the cornstarch and add a bit of water at a time until it gets to the right texture of hard when you push on it but liquidy when left on its own. 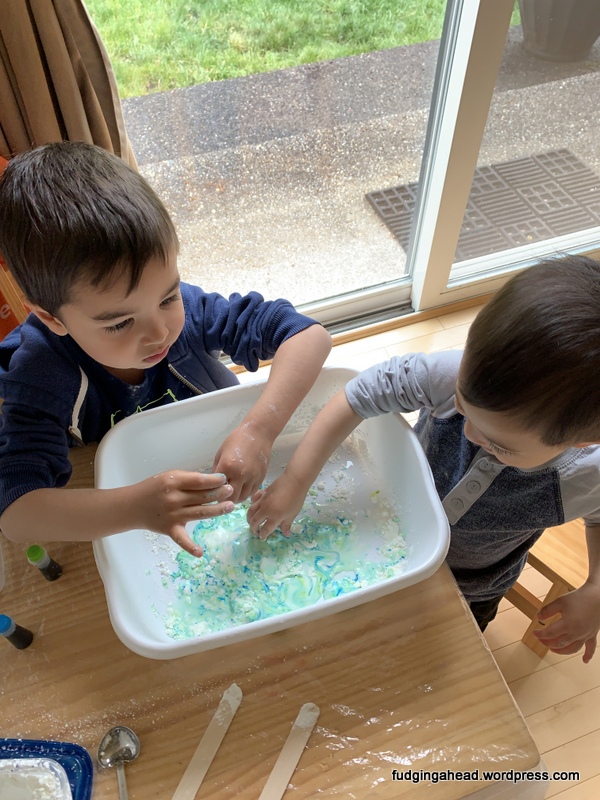 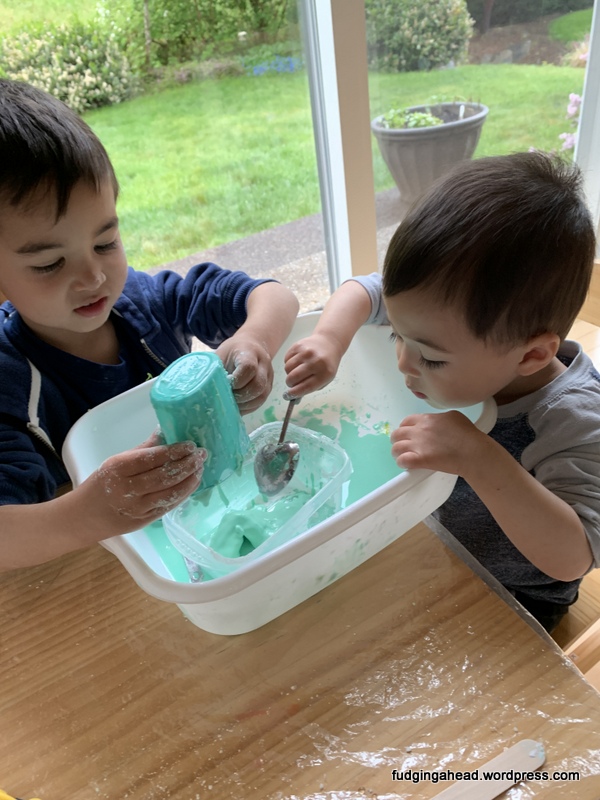 Another way of mixing things up is eating outside, whether at a table or on a picnic blanket.

We also did some art outside. I prepped everything but didn’t tell them specifics. It got us outside with some music, and then once they finished we picked other activities to do.

Moving locations, mixing up supplies (I pulled out some art tools like stamps and paint markers that we hadn’t used for awhile), and putting a small twist on activities makes old activities exciting again.