So, I thought I was only going to update every 6 months or so now but then I remembered doing every 2 months for a bit with the Fudgelet so I might do that at least for now. I thought of it because I was thinking about all of the advances he has made since I last posted about him…and yet I didn’t get to share it. But now I can! It was fun reading back over the Fudgelet’s post too. 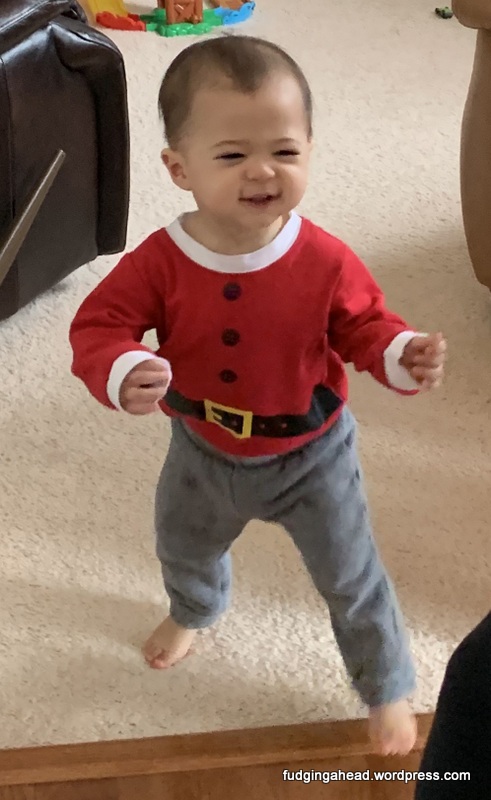 What has he been up to? Well, after all of those early worries about him not babbling, his vocabulary is way more advanced than the Fudgelet’s was at this point. As of when I write this, he has over 15 words/animal sounds and understands so much. He is very observant, too. For instance, he saw me pull out my laptop, and then pulled out his toy one, haha.

He also caught up to the Fudgelet for walking at this point. He not only walks well, but he will walk backwards and almost run. He also still loves riding on the toy ATV we have.

For favorite toys, he loves his puzzles and will yell for them. He isn’t awesome at them, but likes trying. He still loves driving all of the cars and trucks around but also plays with his people and animals, too, walking them around and putting them in the cars. He finally is really liking books. He has his definite favorites and will pull them out, walk over to us and say “read.” Before, he would struggle to sit still for a book, but now he enjoys them and will sit next to the Fudgelet flipping through books.

Music is something he enjoys and sometimes he will dance or even attempt to sing along. He likes it when I sing and will point at me to sing.

For food, he loves to try stuff. As expected, he has his preferences. Sometimes textures will throw him off. When he is in the car seat now, he expects snacks. I started doing it because it was tricky with him getting a delayed lunch when we would take the Fudgelet to school. Now he wants a snack even if he eats right before we go out. Oh well. As long as it makes him less cranky. Like I said with the Fudgelet at this age, I am okay with snacks because he will still eat his meals. He likes to eat more frequently with smaller meals.

My favorite part about this age is how excited he gets for things, and all of the snuggles! He constantly comes over to us and rubs his face on us or tries to give kisses. He likes to be held and will even fall asleep on me sometimes, which I didn’t often have with the Fudgelet.