I am writing this to you after having my first whole week alone with both boys while K is at work. The week started off a bit nerve-wracking (it’s only been an hour!?) to “oh, this is manageable,” and then back to “I’m tired and there is no nap time for me since the Fudgelet doesn’t get naps anymore zzzzz.” It has also been tricky since it is the middle of flu season and almost all of our friends are sick. Play places are also off limits since they carry so many germs. I’m not taking any risks until the Chiplet has at least had his first big set of shots. And even then, I will just make us hermits for this cold season. So not only am I counting down each day until K comes home and I get to have a mini break for a workout, but I also count each week until K is home to have another adult to talk to, and I am counting months until spring.

Now back to the main topic which is the Chiplet being 2 months old already. Time flies even faster with him than with the Fudgelet. He is doing pretty well at being flexible. Sometimes we drag him out to do errands or fun stuff for the Fudgelet, and I try to do it around when he is due for a nap so that he can just sleep. He mostly cooperates and sleeps when he needs it, and I try to save feeding time for when we get home or before we leave. Not that I mind feeding him in public, but if it is just me, it is tricky with a toddler who needs to hang around. Not to mention that the Fudgelet has been toilet-trained for awhile now, so taking us all out means thinking about the Chiplet’s needs and the Fudgelet’s needs for easy toilet access. And again, easy toilet access is harder with a stroller or the baby carrier since it is not easy picking up the Fudgelet to use the toilet while wearing his brother. 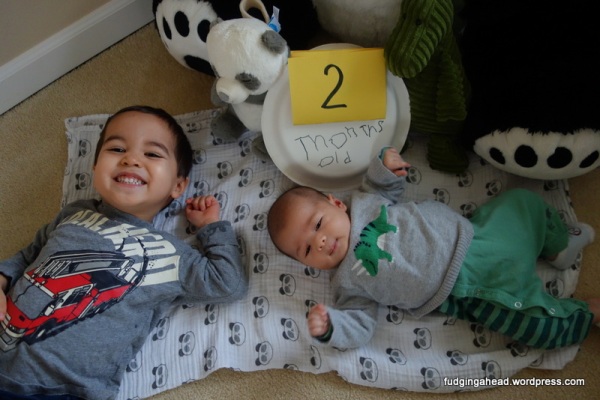 The Fudgelet has also been good about being flexible. We might have plans for the day to go somewhere, but it might be “we’ll go this morning if your brother isn’t napping” and then “okay we will try after lunch” followed by “oh, he is doing a long nap, so we will maybe go in an hour.” 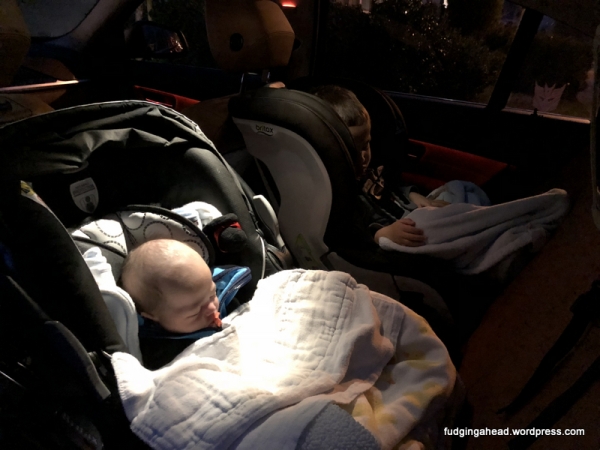 A rare moment of both boys napping

This past month, the Chiplet has been smiling up a storm and is almost laughing. He is still rolling and loves doing it. I have been trying to get him to make more sounds but he is quieter than the Fudgelet was at this age. But, the Chiplet is more physically able than the Fudgelet was. The rolling, but also copying us in other ways. When I do workouts, he gets really excited and tries to mimic me. He also is able to break his arms out of his swaddle more easily than his brother could. I have been having him nap occasionally without it to train him. He doesn’t sleep as well with his arms out, but in general he is a much better sleeper than the Fudgelet was. For naps, he lets me know by yawning/sleepy eyes/etc. and if I miss those signs, he fusses until we start to go upstairs to his crib. Then he calms down as if to say “finally!” Once he is ready, I can put him in his swaddle, turn on some white noise and he is asleep within 1-2 minutes. It is great since I can bring the Fudgelet upstairs too, and then we just read a book in his room until his brother is asleep before going back downstairs for some playtime together. 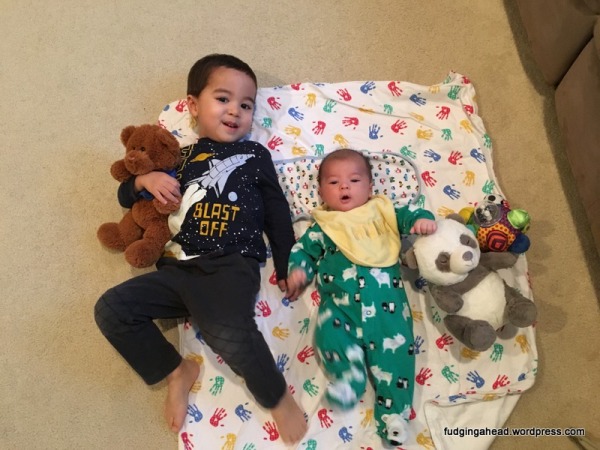 The Chiplet is bigger than the Fudgelet was, too. He was born smaller, but has definitely caught up. He is already wearing 6 month clothes and his brother was still wearing 3 month clothes for another month. Maybe it’s the extra sleep? More growing time that way? Haha. 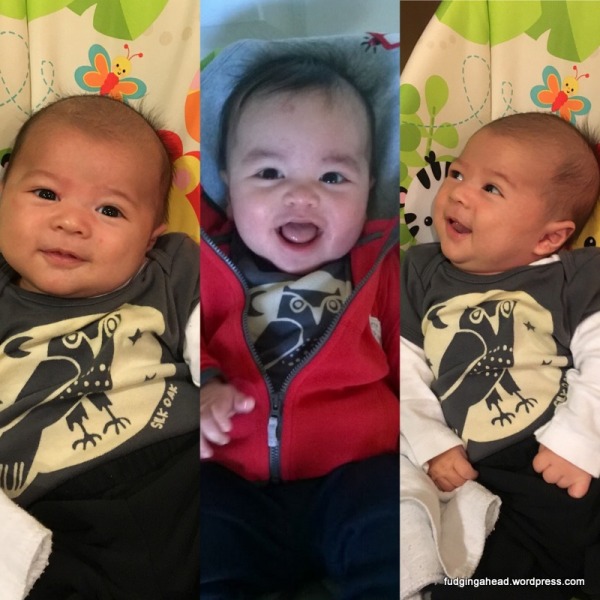 The Fudgelet in the middle was 5 months old in that picture.

Two ways the Chiplet and the Fudgelet are similar is they both like to look at the camera for pictures, although it is harder to get the Chiplet to smile for pictures. He is a bit more serious. The Fudgelet was an expert at spitting up and appears to have taught his brother. At least I remember my tricks for the Fudgelet, with using layers of burp cloths, blankets, etc. everywhere. And I have more than enough clothes to change him into (although I still end up doing laundry everyday).

The Chiplet’s hair is getting longer, although he doesn’t have as much as the Fudgelet at this age. The Fudgelet’s hair was still black at this point, and super thick on top. The Chiplet didn’t have much hair on top when he was born, and now it is filling in. What’s neat is you can see a cow-lick as his hair grows. 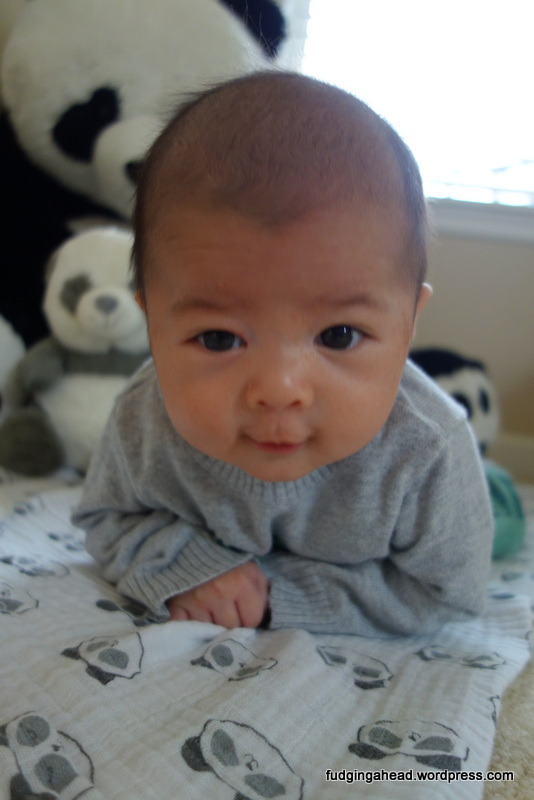 K and I love looking back and comparing pictures of them, especially at this age since each day their faces seem a little different. Sometimes the boys look so alike, and other times very different. Sometimes we think one boy looks more like one of us, and then the next day it will be the other parent. It’s also neat when certain pictures show you what they will likely look like when they are older.

Stay tuned for the next update!

One thought on “Topic-Changing Thursdays: The Chiplet is 2 Months Old!”