K loved the Tikka Masala meatballs I made, but wanted me to make the sauce with chicken. So, I brainstormed a bit and came up with my own version of Chicken Tikka Masala, which is probably not authentic at all…but it tasted good to us! 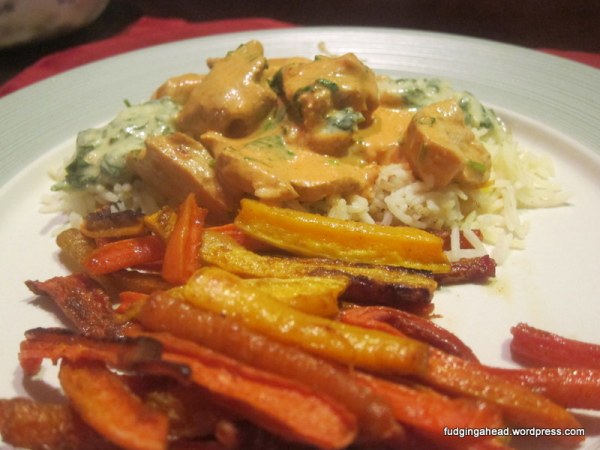 Basically, I began by taking chicken thighs and cutting them into bite-sized pieces, trimming off any waste. Next, I seasoned them the same way I did in this recipe, but simplified.

That means I took this combination of spices, stirred them together, and coated them on the chicken, adding a bit of olive oil as well.

Next, I placed the chicken on foil-lined baking sheets and baked at 450 degrees until cooked through (about 20 minutes). Because I was working around the Fudgelet’s schedule, I actually refrigerated the chicken until dinnertime.

Then, I made the same sauce from the meatball recipe…

Stir together the cumin, paprika, and salt. In a small saucepan, melt the butter. Add the garlic and red pepper flakes, and saute for one minute. Then, add the seasoning mixture, cooking for one minute. Add the tomato sauce and cream, then bring to a simmer. Simmer for 20 minutes. Remove from the heat and stir in the cilantro.

While the sauce simmered, I added the chicken near the end to heat it up and coat it in the sauce. If you cook the chicken and sauce simultaneously, then you can just throw the chicken in at the end.

Ta-da! It was pretty easy, and I liked that I could make part of it ahead of time.