I guess Wednesdays could have a “WFAWs” (What Fudgelet Ate Wednesdays) series? As the Fudgelet neared his 6 month mark, we started him on solid food. Today’s post I will share his first foods and first reactions. It’s been fun for all of us, although also a learning curve for everyone. 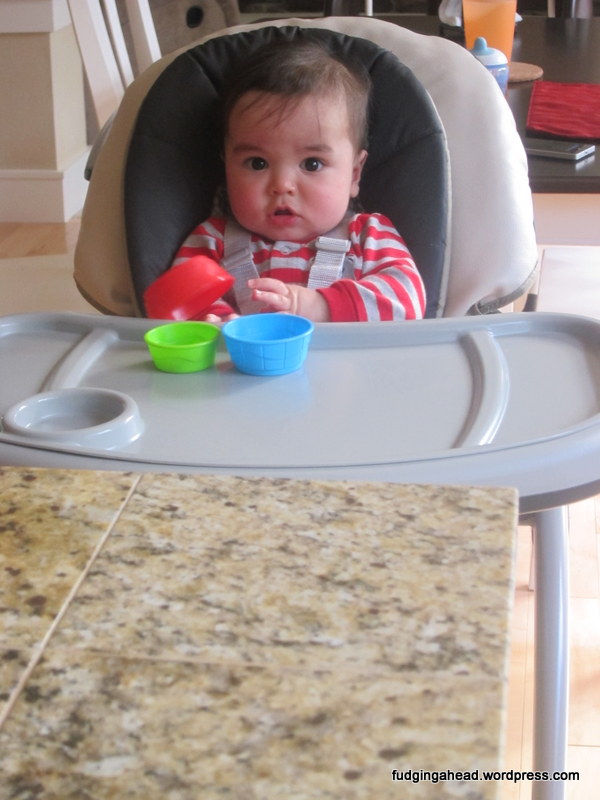 First, we started with rice cereal, as directed by his pediatrician. I mixed it with some breastmilk (I have so much frozen and have been waiting for a chance to use it, since he won’t take a bottle!) and had to make it like soup in order for him to try it. Can you imagine what it must be like to have only had liquids and then one day -bam!- a new texture? I mean, obviously we all went through it, but it would be interesting if we could remember those thoughts and feelings. We ended up offering the rice cereal two days in a row, then waited over a week to try it again. My dad encouraged me to keep trying a little each day, so I did. Eventually the Fudgelet learned to swallow the food a bit. Next, it was time for me to make some food!

I had asked for (and received) a baby food maker. Now, yes, I do have a steamer and a food processor, but after seeing another mom use her baby food maker, I was convinced. It has been handy since I can both steam the food in it, leave it until I’m ready for it, and then puree it in the same container. Fewer dishes to clean later, no worries about water boiling over or setting a timer (it does it for me), and it doesn’t take up as much space as a blender/food processor and steamer, so I can leave it out on the counter.

Initially, I was going to start with pears, but I happened to have an apple ready. So, I peeled and cored it, then steamed it and pureed it…and created applesauce. Yeah, I didn’t really see where that was going initially–haha. But, I was amazed how tasty it was. Unfortunately, the Fudgelet was not a fan. I’m fairly certain the texture is what bothered him, because it isn’t creamy. 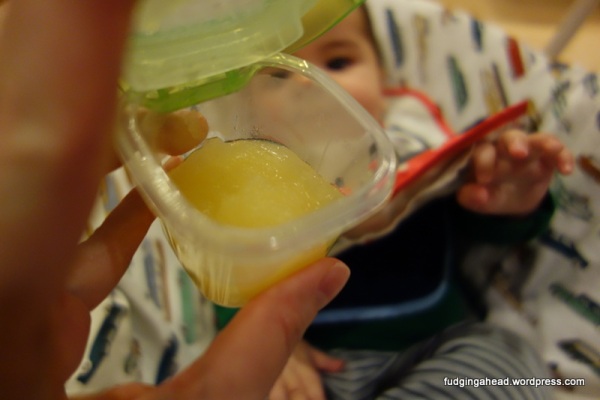 Luckily, I had some advice from friends, so I next offered avocado. Initially I just mashed it with some breastmilk. Later, I did it without the milk and he was still fine. K offered him some, though, and we had a throw up incident. Not unusual when you start solid food (they have strong gag reflexes and are still learning!) but later we realized that the issue might have been how the food was offered. You have to be really careful to place the food in the front of the mouth, otherwise they will start gagging.

Next up, I steamed carrots. I did plain carrots instead of the rainbow ones just to be safe. (A friend gave her daughter purple carrots and she had a reaction.) I wanted to make sure that he could at least do regular carrots before offering any fancy ones. Well, carrots are by far his favorite! He was a bit indifferent for the first few bites, and then he couldn’t get enough! I had only portioned out a bit for dinner, but he devoured them! To keep in the same vein, I followed with sweet potatoes. Again, a hit. Initially he was confused by the texture (a bit stringy) but did better once I pureed it. (At first I just mashed it after cooking it in the microwave.) I have since offered sweet potato that I steamed, and he also liked it that way, too.

Because I didn’t want him to get used to only sweet foods, I then gave him broccoli. Again, his first impression was confused and disgusted, but then he liked it.

I’ve also mixed a few foods. One night we did a mix of cold sweet potato and cold avocado. Another night I mixed broccoli with some applesauce (heated). Maybe those combinations sound weird, but I can assure you that they were tasty! And yes, I can assure you because I eat the food, too. I found that it helps him get excited about the food if he sees me eat some. It also lets me know that I’m not giving him bad-tasting food, haha!

Recently I started mushing some bananas as I eat them and putting it in his mouth. He loves it, but it has meant that he now eyes all of the food I eat in front of him. My granola is looking really tasty to him, as is my juice in the morning. Uh oh!