All you really need to do is read the title. I mean, come on. Who didn’t think it sounded good? Well, my husband for one. He doubted that I could mix and match the recipes from the Momofuku Milk Bar cookbook as much as I did. But it’s ok, he was still a huge fan of the results. He even helped by taste testing each part for quality control (hehe). All of the recipes below are adapted from the cookbook. 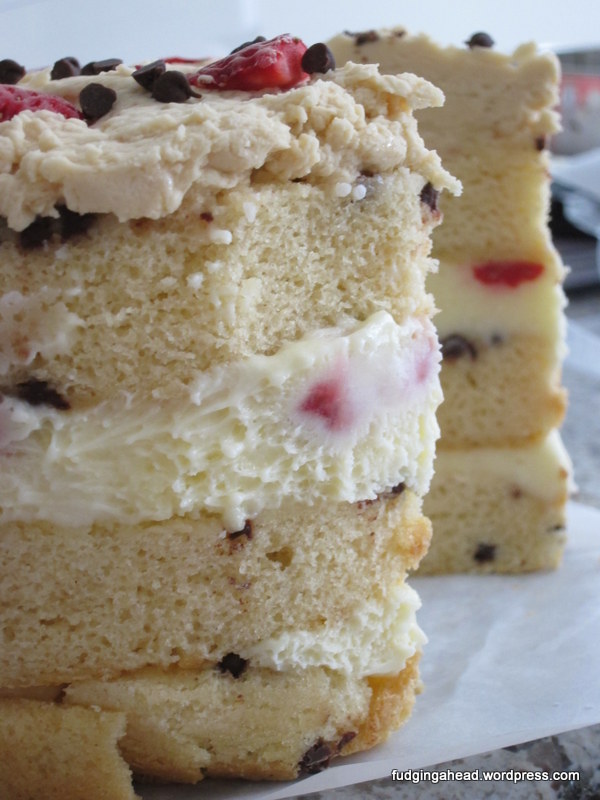 Lisa has made lots of this style of cake. She showed me the steps and I got to see how liquidy the batter is. I also got to see how to construct it. She doesn’t follow their directions completely, and I decided to do it her way since I saw it in action and it worked well.

Lisa doing the finishing touches on her cake (I totally stole the strawberry idea from her!)

I was really nervous to make one of these cakes because they come with warnings of baking out of the pan into the oven, and they require special equipment if you want to follow the rules completely. I still stand by my thought that you can make these cakes using regular circular cake pans and get a normal looking layer cake, but that’s up to you. The Milk Bar style of cakes involves cutting out the layers from a quarter sheet pan and then not frosting the sides, just the top. It makes decorating a cinch, especially for someone like me who doesn’t like decorating. The cake still comes out looking really cool, and not like you were lazy. The recipes are basically those from the cookbook, but I made a couple changes and have included some ideas I learned in the process. I also added some fresh strawberries because they were available. Feel free to add your own touches.

For the cake making process, you will need:

Directions for the Liquid Cheesecake Filling

You should make this first and have it in the fridge until you are ready for assembling the cake.

Heat the oven to 300 degrees. Line a square baking pan with plastic wrap. (It’s supposed to be 6×6 but my 8×8 worked just fine–just be sure to check it more if you are using something bigger than 6×6).

I know, I know, plastic wrap in the oven feels wrong, but it was ok, I promise!

Using a stand mixer with the paddle attachment, mix the cream cheese on low for 2 minutes. Scrape down the sides as necessary. Then, add the sugar and mix for a couple minutes until the sugar is fully incorporated, scraping the bowl some more. 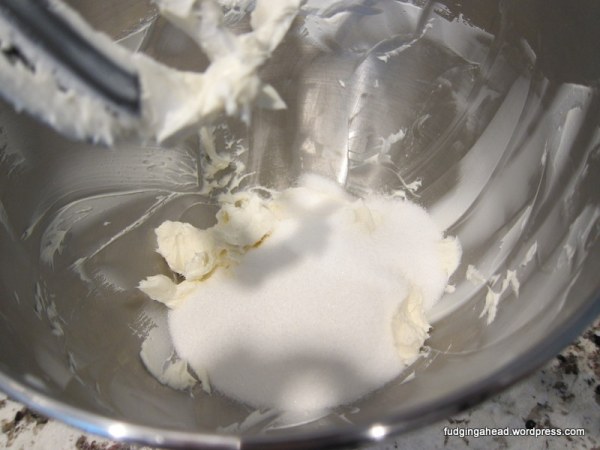 The next few steps…

Whisk together the cornstarch and salt in a medium bowl, then whisk in the milk in a slow, steady stream. Whisk in the egg until it is homogeneous. Add the mixture into the mixer while mixing on medium-low. Mix for a few minutes until it is smooth. Scrape down the sides.

Mixing in the mixture–watch the color change, then pour into the pan. The bottom right is the baked one. Not much different from unbaked, but boy is it tasty!

Pour the batter into the pan and bake for at least 15 minutes. Check to see if the cheesecake is firmer on the edges and jiggly in the center by shaking the pan. Check every 5 minutes after the first check. It should be done in about 25 minutes if not sooner. It should not brown.

Let it cool completely before storing in an airtight container in the fridge. It should resemble a cheesecake but be spreadable, like cream cheese.

Make this next, after the filling. I use buttermilk powder instead of buttermilk, where you use water in place of the buttermilk and add the powder later. It still worked just fine in this recipe.

Heat the oven to 350 degrees. Spray the 1/4 sheet pan and line it with parchment.

Brown 3 Tablespoons of the butter and set aside.

With a stand mixer, cream the browned butter and remaining butter, along with the sugars on medium-high for 2-3 minutes. 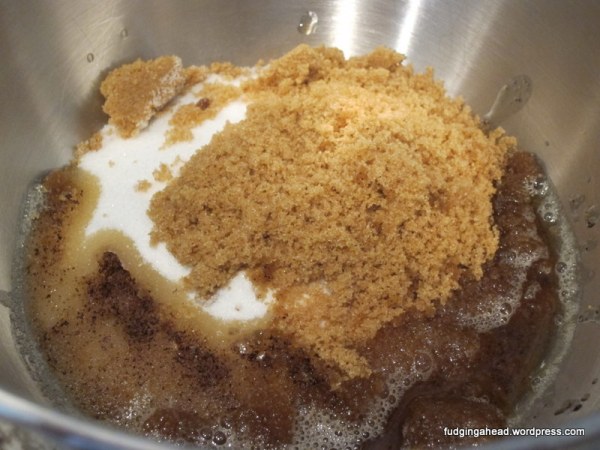 Look at the dark flecks from the browned butter. Mmm. 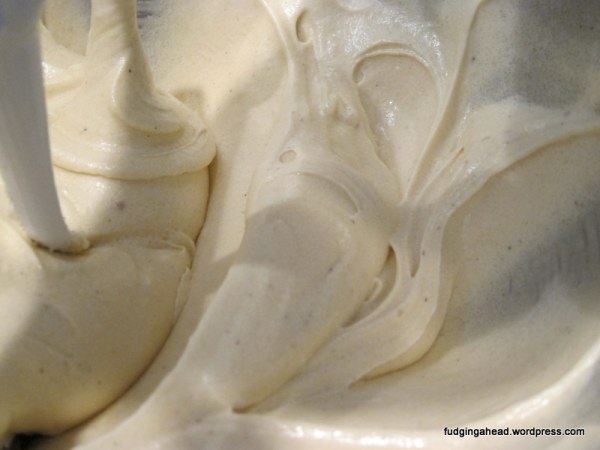 On low speed, stream in the buttermilk, oil, and vanilla. Increase the speed as much as you can to medium-high (I couldn’t go very high because it started to splash). Beat for at least 5-6 minutes until it is completely homogeneous. Mine took closer to 10 minutes.

(You can use a food processor or blender for this step if you don’t mind cleaning up another appliance. I tried the food processor for a few minutes but it didn’t work any better than my mixer, so I went back to that.)

Update 7/18/15: After making the brown butter cake portion again, I discovered that my (cheap and basic) blender actually does a good job at mixing up the batter once all of the liquids are added. So, I would recommend using a blender for adding the buttermilk/etc., and for adding the flour. One extra dish to clean, but it cut the time down by a bunch!

On low speed, add the cake flour, baking powder, and salt. Mix for just under a minute until everything has just been incorporated. Scrape down the sides and mix for another 45 seconds.

Spread the batter in the pan. If you are adding chocolate chips, sprinkle them over the top of the cake so that they are evenly scattered, as many as you desire. 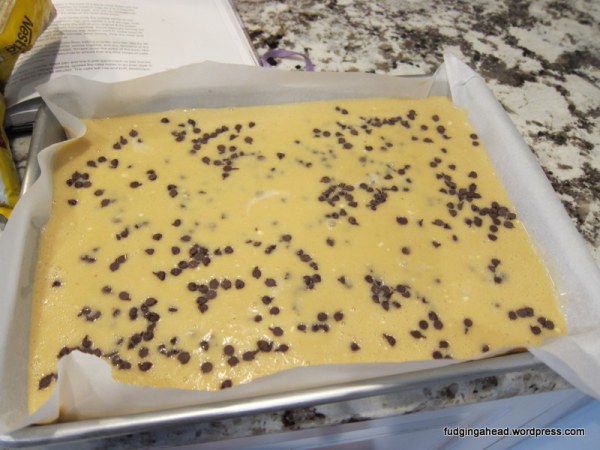 Bake for 30 minutes and check by pressing the edge with your finger. If it bounces back slightly and the center is no longer jiggly, it’s done.

Let the cake cool on a wire rack.

You can either make the coffee frosting now, or wait until right before you need it, which is what I did. So, either do these steps now or skip to the frosting and then come back.

You will need to make a “soak” for the cake layers. I followed the soak they did for the birthday cake, which involves 1/4 cup milk mixed with 1 teaspoon vanilla extract. 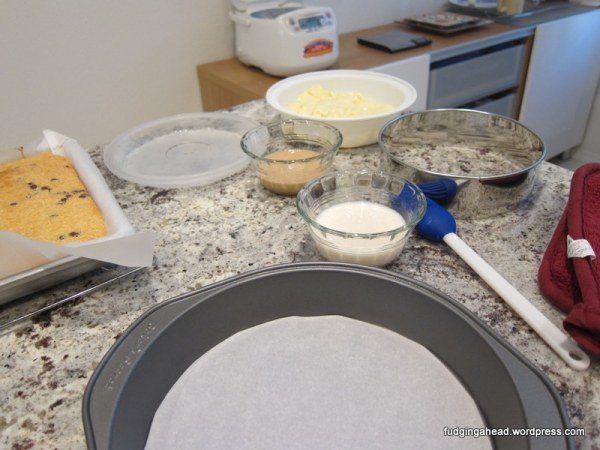 Pull out everything you need–pans, the cheesecake filling ….

Flip the cake onto parchment or a surface you can cut on. Remove the parchment that was on the bottom of the cake when it baked. 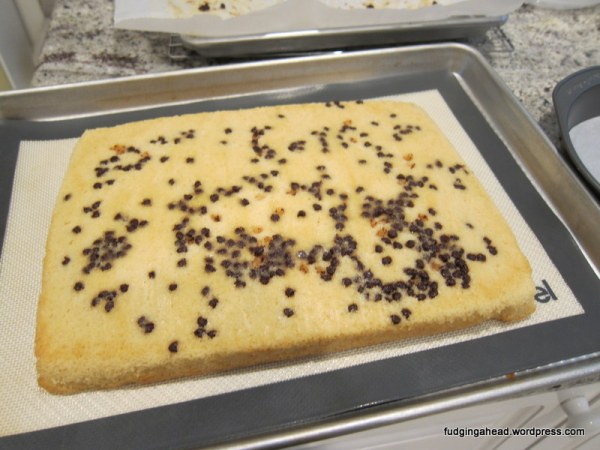 Using the cake ring, figure out where you can cut two circles so that you can leave large scraps behind. Then, cut out two circles of cake.

Lisa did a better job of this. I am so NOT a visual person. And yes, that is the parchment from the bottom in the back. It has yummy bits on it, so feel free to clean them off later. 😉

Take the circle baking pan (or whatever you decided to use) and line the bottom with parchment. Put the cake ring inside. Using the pan lining paper or acetate, make a cylinder and tape it together to go inside the cake ring. 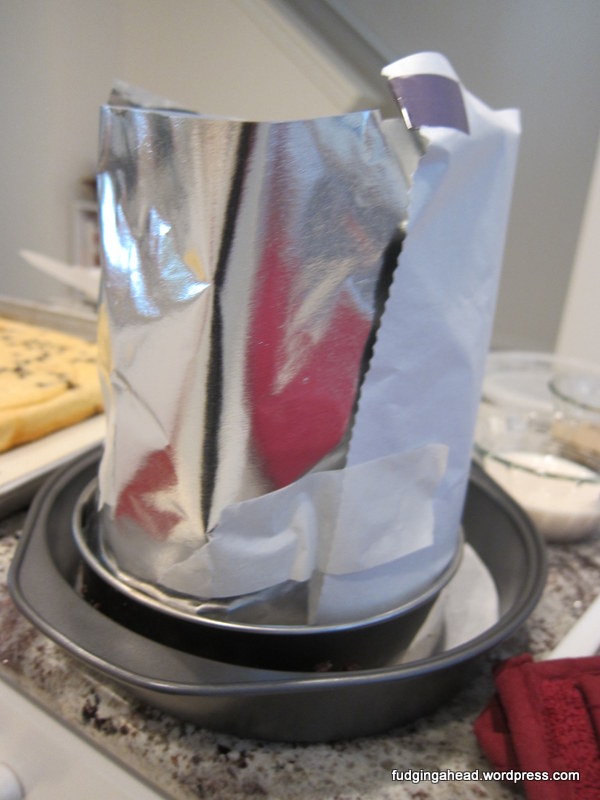 I couldn’t remember which was supposed to face in, so I did one of each and it still worked fine.

With the remaining scraps of cake, use the biggest ones you can to push in the bottom of the cake ring and make your first layer. Break pieces as needed, in order to make a full layer. Brush some of the soak on top to saturate the cake. 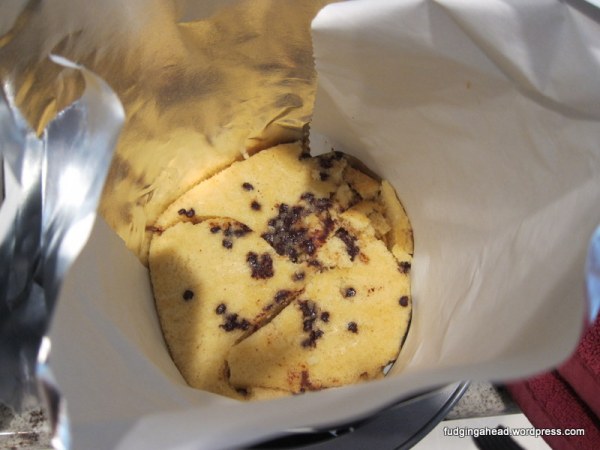 Believe it or not, after this is frozen, it becomes a nice solid layer!

Take half of the filling and put it on top, spreading evenly. 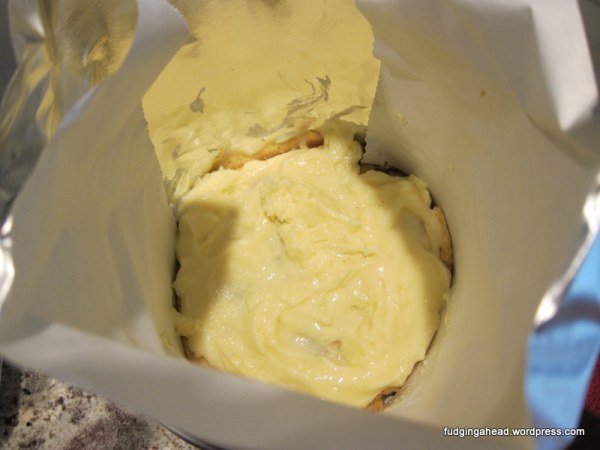 Put another layer of cake on top, using one you cut out. Again, soak, and again, use the remaining filling to cover.

For the final layer, put it on top and use the soak. Now we need the coffee frosting which you will spread on top (see below).

You can see in the second row how soaked the “soak” makes the layers.

After it is assembled, put it into the freezer for at least 12 hours to set up. When you remove the cake, slide off the cake ring first, then the paper. I recommend slicing now because it gets harder when it warms up. Then, store in the refrigerator in an airtight container, using wax paper to keep the pieces pretty.

Filling leak! (As I said before, I didn’t do the best job for the bottom layer pieces, but this was my first time and it still was fine when sliced.)

Cream the butter and sugar together in a mixer on medium-high for 3 minutes until fluffy. Scrape down the sides.

Whisk together the coffee, salt, and milk in a small bowl. On low speed, stream the coffee milk into the mixer a little at a time, making sure it gets absorbed. If you mess this up (as I did), it’s ok. I actually found I needed to add extra sugar, a little at a time, until I got the right consistency for frosting. If your weather is humid you might have the same problem because buttercream frosting can be a little finicky.

See how liquidy it was? I added more powdered sugar to help after this.

It was the perfect topping to this summery cake!