A candy bar pie, to be exact.  It took 6 recipes to make–all from the same cookbook (Momofuku) and not without some hiccups.  I am not entirely sold on the recipes in this book, yet.  Some of them turn out ok, but some are a little off.  Just the fact that they expect people to find glucose easily … *sigh* (and yes, I checked Amazon like they said).

This was all in preparation for Pi Day–exciting!  (As a sidenote, if you don’t know me, I am a major math nerd, since my job is actually a math teacher, so pi day is awesome as a baker and as a teacher!)

This involves mixing portions of cocoa powder, flour, salt, cornstarch, and sugar.  The recipe had weight measurements, as well as cups/etc., so I tried the grams but the salt one seemed a little off.  They want you using kosher salt, which I did, and the resulting crumb was a little salty–even for my salt-loving husband.  Not horrible, but next time I would use a little less.

You mix it with melted butter until you get crumbs.  This was another challenge since mixing fully breaks up the crumbs, but not mixing enough means some of the dry mixture is just loose.  I opted to mix more and just have crumbs a little more broken up.  I was going to make them into a crust anyway, so it didn’t matter.  This also made the first step of processing them into “sand” for the crust an extraneous step.  You bake the crumbs at 300 degrees for 20 minutes, and then cool.  The taste of them is really close to Oreo crumbs, but a little nicer.  It’s a nice alternative to the regular Oreo crusts, especially if you want to make a cookies n cream dessert and you don’t have Oreos to grind up.

Super simple: you add more butter to make it into a crust.  The crust was a little hard to get into the tart pan.  It didn’t really stick like I wanted, and it was evident in the next recipe.  Maybe it needed more butter?

Here are the pics from the process of chocolate crumb to crust . . . 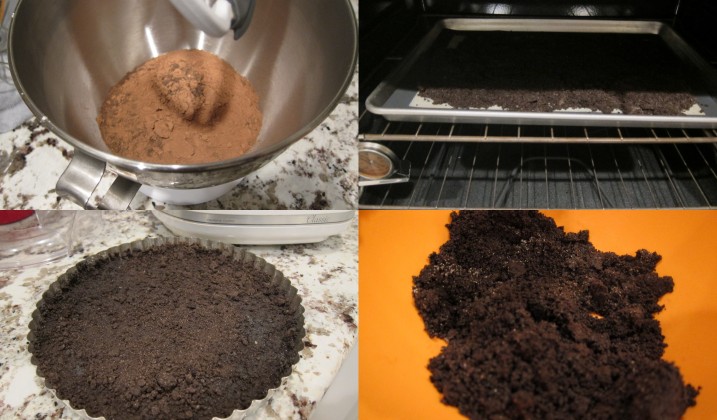 Clockwise from top left: dry mixture, baking the crumbs, mixing the crumbs with butter for the crust, crust in tart pan

After the pie crust, I also worked on making Peanut Brittle.  This was super easy.  You make a dry caramel by melting sugar on the stove. 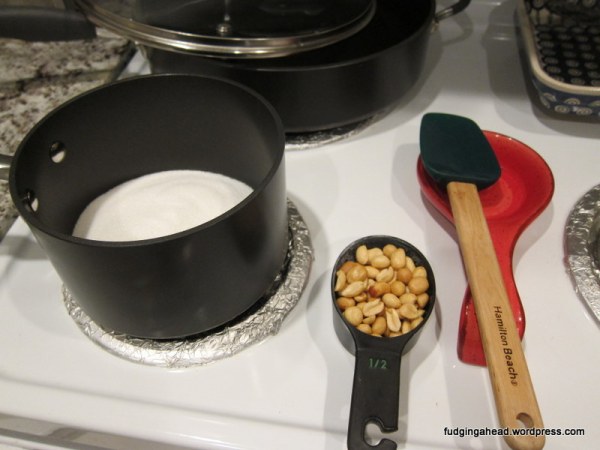 Sugar, heatproof spatula, and peanuts are ready to go!

Then, you stir in peanuts and spread it out on a Silpat.  It sets quickly!  Once that’s done, you just process it by using a rolling pin or food processor until you get small pieces.  I ground mine to almost a powder, but boy does it have a nice salty sweet flavor! 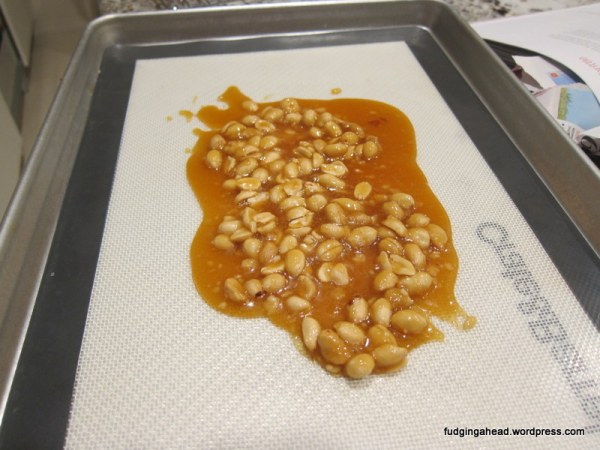 Peanut Brittle ground up and ready for another recipe

And that’s right . . . that was just day one of the recipes . . . Wait until you see what the next day brings.